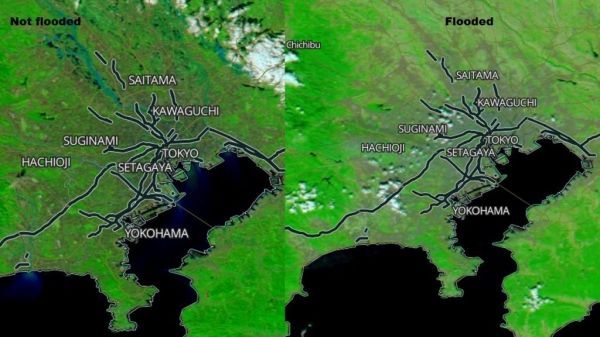 Satellite imagery reveals the extent of flooding in the region around Tokyo.

Typhoon Hagibis made landfall in Japan over the weekend of October 12 and 13, bringing damaging winds, rough surf and flooding rains. NASA’s Aqua satellite provided a visible image of the flooding caused by the torrential rainfall.

On Oct. 12 at 5 p.m. EDT (2100 UTC), the Joint Typhoon Warning Center issued their final bulletin on Tropical Cyclone Hagibis. The storm has moved off Japan and re-emerged in the Northwestern Pacific Ocean where it is becoming extra-tropical. On Oct. 12 at 5 p.m. EDT, Hagibis was located near 28.6 north latitude and 141.9 east longitude, about 113 nautical miles south-southeast of Misawa, Japan. Hagibis was speeding to the northeast at 36 knots (41 mph/67 kph) and had maximum sustained winds 65 knots (75 mph/120 kph), still at hurricane-strength.