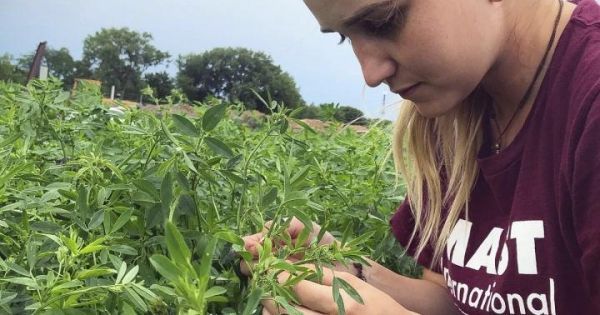 Has anyone ever told you to eat a banana when you have a muscle cramp or eye twitch?

Has anyone ever told you to eat a banana when you have a muscle cramp or eye twitch? That’s because bananas have potassium. Potassium is an important nutrient for humans, and an even more important nutrient when it comes to alfalfa.

With an economic value of $9 billion annually in the United States, alfalfa is the most valuable crop behind corn and soybeans. Because of its high nutritional content, alfalfa is a common feed source for farm animals like cattle, horses, sheep and goats. So, understanding this relationship between alfalfa and potassium is a worthwhile goal.

“Potassium plays a role in many processes within an alfalfa plant,” says Jacob Jungers, a researcher at University of Minnesota. “For example, it’s important for converting sunlight to energy, transporting molecules and growing new cells.”

However, too much potassium can be a problem. “When alfalfa plants are given more potassium than they need, the concentration of potassium in the tissues increases,” says Jungers. “This is called luxury consumption.”