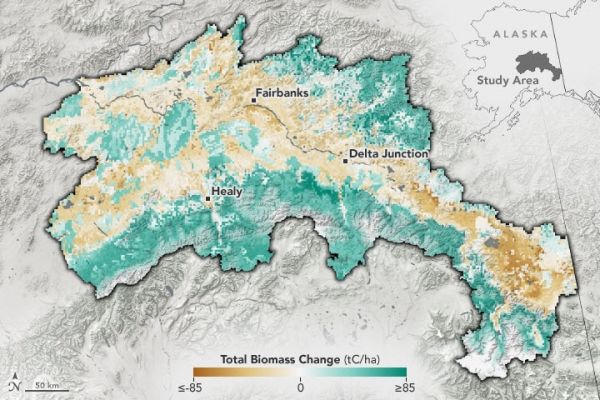 In a future with higher temperatures and other climate changes, Alaska’s boreal forests could look significantly different than they do now.

According to a new study that is part of NASA’s Arctic Boreal Vulnerability Experiment (ABoVE), the warmer, drier conditions of the future could lead to a net loss of plant life in some regions of Alaska, while also changing the ratio of species that grow in them. These vegetation changes caused by global climate change could, in turn, affect Arctic climate in complex ways.

A research team led by Adrianna Foster of Northern Arizona University adapted and ran a computer model capable of making detailed simulations down to the level of individual trees. The scientists depicted the future landscape in a portion of eastern Alaska under two climate change scenarios: one in which greenhouse gas emissions are moderately reduced, and one in which they continue to increase at current rates.