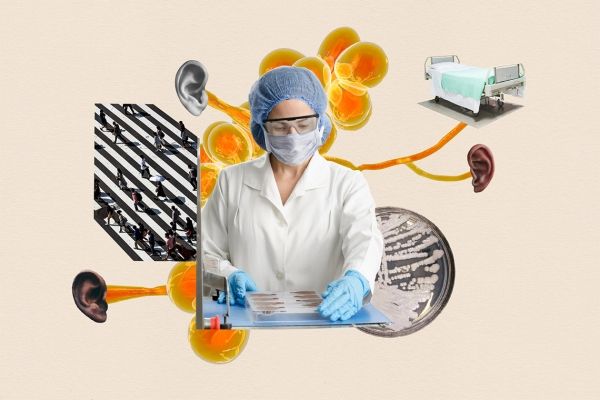 In 2009, medical researchers in Japan examined the infected ear of a 70-year-old woman and found a curious new pathogen – a drug-resistant fungus that no one had ever identified.

In 2009, medical researchers in Japan examined the infected ear of a 70-year-old woman and found a curious new pathogen – a drug-resistant fungus that no one had ever identified. The researchers christened it Candida auris (auris is Latin for “ear”) and published a paper about it.

Ten years later, C. auris has spread to six continents and more than 30 countries, including Canada. It is hard to diagnose with standard lab tests, and difficult to treat because it has developed a resistance to antifungal drugs. C. auris spreads easily through touch and can survive on surfaces for weeks. It kills between 30 and 60 per cent of people it infects, most of whom are hospital patients.

Although C. auris is recognized as a serious emerging global health problem, its origins remain mysterious, how it functions isn’t well understood and treatment options are limited. For Professor Leah Cowen, all of these unknowns made it an intriguing organism to research. Cowen is chair of U of T’s department of molecular genetics, and holds the Canada Research Chair in Microbial Genomics and Infectious Disease. Her lab aims to understand how C. auris works, and hopes to develop new drugs that will be effective against it and other fungal pathogens in humans and crops.

“We’ve been very busy trying to understand what genes are responsible for drug resistance in this organism, and what genes are important for its ability to cause disease,” Cowen says. In fact, she and her research team have identified a molecule in the fungus that is a promising target for what could eventually be a new class of antifungal drugs.

Continue reading at University of Toronto.