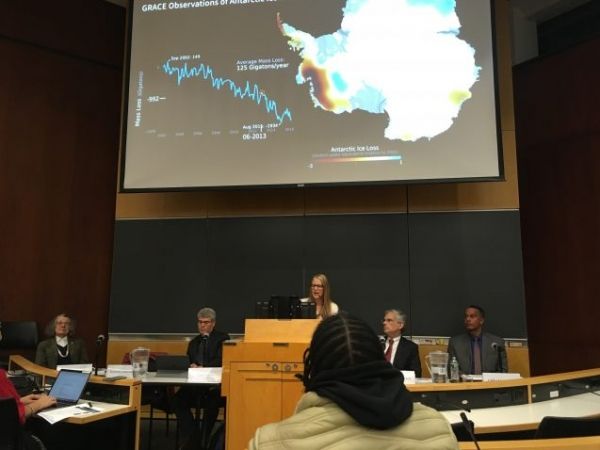 Scientists gather to discuss practicality and feasibility of systems to reduce the threat of coastal storm damage along NY & NJ coastlines.

It’s been seven years since Superstorm Sandy brought the city that never sleeps to a grinding halt. High tide and storm surge — the pile of water that built up in front of Sandy as she moved up the coast — combined to bury lower Manhattan under 13 feet of water. Across the five boroughs, subways, highways, and parking garages flooded; homes and businesses were destroyed, and 53 people died. It is estimated that Sandy caused $19 billion in economic damages in New York City alone.

The Superstorm Sandy anniversary also marks seven years since New York started talking about building storm surge barriers to protect itself from future storms. At a recent event hosted by Columbia University’s Sabin Center for Climate Change Law and the Earth Institute, experts discussed a study that is evaluating the feasibility of building storm surge barriers around New York and New Jersey. The panelists also debated whether such a measure is a good idea.

“Most people in the region are unaware of the study, but its results can have major economic and environmental impacts,” explained moderator Michael Gerrard, director of the Sabin Center, during his opening comments. “The Sabin Center felt it’s important to increase public understanding of what is now being examined.”