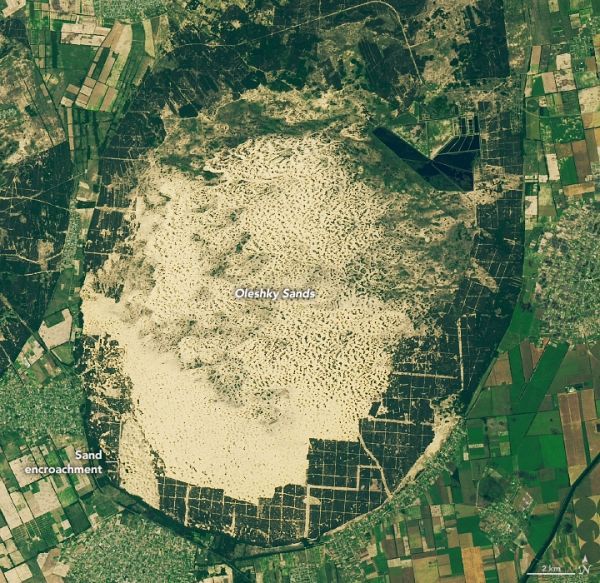 North of the Black Sea, the landscape of southern Ukraine is awash with eye-catching landforms that beg the question: what is that? About 65 kilometers (40 miles) northwest of the colorful Sivash lagoons, the land abruptly turns from forest to sand. This oval-shaped region, known as Oleshky Sands, is the largest expanse of sand in Ukraine and the second-largest in Europe.

The 161 square-kilometer expanse of semi-arid desert is visible in these images acquired on June 15, 2019, by the Operational Land Imager (OLI) on Landsat 8. At its widest, Oleshky Sands measures about 15 kilometers across.

Dunes rise up to 5 meters above the surrounding sand and punctuate the landscape. To try and prevent the dunes from encroaching on populated and agricultural areas, dense stands of pine trees were planted around the sandy expanse. Still, an analysis of 30 years of Landsat imagery (1987 to 2017) showed areas where sand had migrated into the forested areas, particularly on the northeastern and southwestern sides.