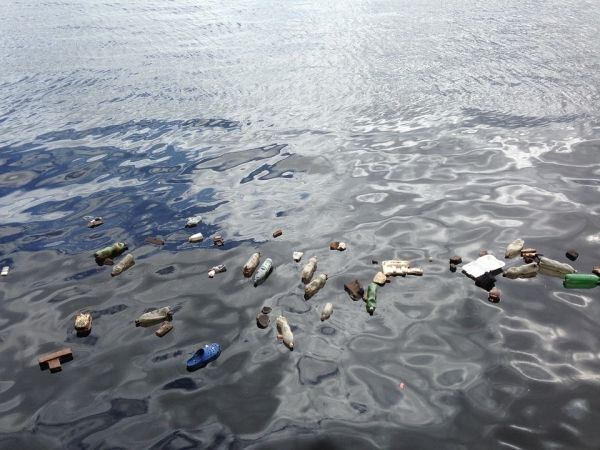 Trillions of plastic fragments are afloat at sea, which cause large “garbage patches” to form in rotating ocean currents called subtropical gyres.

Trillions of plastic fragments are afloat at sea, which cause large “garbage patches” to form in rotating ocean currents called subtropical gyres. As a result, impacts on ocean life are increasing and affecting organisms from large mammals to bacteria at the base of the ocean food web. Despite this immense accumulation of plastics at sea, it only accounts for 1 to 2 percent of plastic debris inputs to the ocean. The fate of this missing plastic and its impact on marine life remains largely unknown.

It appears that sunlight-driven photoreactions could be an important sink of buoyant plastics at sea. Sunlight also may have a role in reducing plastics to sizes below those captured by oceanic studies. This theory could partly explain how more than 98 percent of the plastics entering the oceans go missing every year. However, direct, experimental evidence for the photochemical degradation of marine plastics remains rare.

For the study, published in the Journal of Hazardous Materials , researchers selected plastic polymers prevalently found on the ocean surface and irradiated them using a solar simulator system. The samples were irradiated under simulated sunlight for approximately two months to capture the kinetics of plastic dissolution. Twenty-four hours was the equivalent of about one solar day of photochemical exposure in the subtropical ocean gyre surface waters. To assess the physical and chemical photodegradation of these plastics, researchers used optical microscopy, electron microscopy, and Fourier transform infrared (FT-IR) spectroscopy.