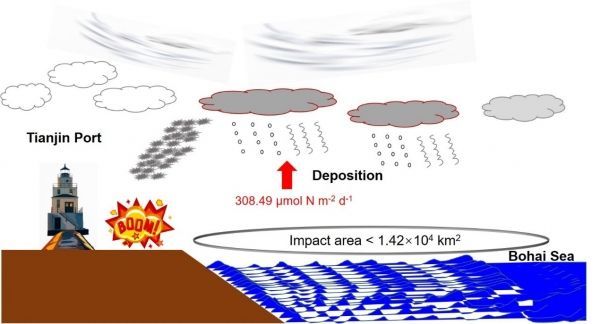 An explosion occurred in Tianjin Port on August 12, 2015. According to the characteristics of the large-scale airflow field at that time, nitrogen-containing pollutants generated by the explosion were transmitted to the Bohai Sea. However, the impact of these nitrogenous substances on the Bohai Sea region remains unclear.

A research team led by Dr. ZONG Zheng from the Yantai Institute of Coastal Zone Research of the Chinese Academy of Sciences confirmed and evaluated the effects of the Tianjin Port explosion on the atmospheric nitrogen deposition in the Bohai Sea area.

The work was based on the nitrogen and oxygen isotopes of the aerosol nitrate on Beihuangcheng Island in the Bohai Strait, and it was published in Atmospheric and Oceanic Science Letters.