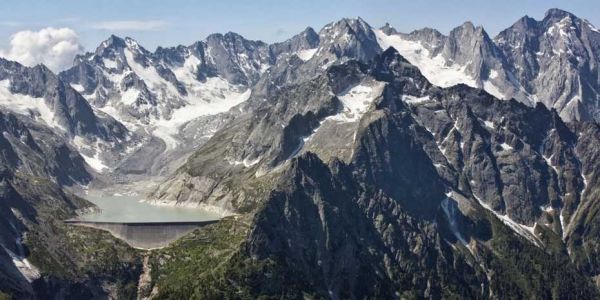 Glaciologists at ETH Zurich and WSL assessed the global water storage and hydropower potential that could be freed up in future as glaciers melt in response to climate change.

Global warming will cause substantial glacier retreat for the majority of the world’s glaciers over the next few decades. This will not only spell the end for some magnificent natural monuments, but also importantly affect the water cycle. In high-​mountain regions, these ice masses act as reservoirs feeding water to large river systems, and balancing seasonal discharges.

Without glaciers, rivers would carry considerably less water in summer, which would have noticeable consequences for water availability, energy production and agriculture in many regions of the world. Researchers had previously discussed the idea of compensating the shrinking storage function of glaciers with reservoirs (see Zukunftsblog – in German only).

A group of glaciologists from ETH Zurich and the Swiss Federal Institute for Forest, Snow and Landscape Research WSL is now again engaging in the discussion about the dwindling ice: in a study published in Nature, they investigate the global potential for storing water and producing hydropower in presently-​glacierised areas that will become ice-​free within this century.