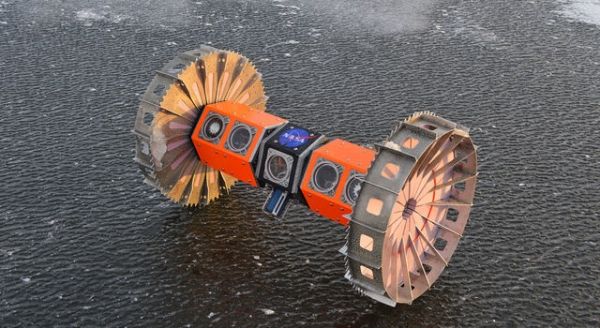 An underwater rover called BRUIE is being tested in Antarctica to look for life under the ice.

A little robotic explorer will be rolling into Antarctica this month to perform a gymnastic feat - driving upside down under sea ice.

BRUIE, or the Buoyant Rover for Under-Ice Exploration, is being developed for underwater exploration in extraterrestrial, icy waters by engineers at NASA's Jet Propulsion Laboratory in Pasadena, California. It will spend the next month testing its endurance at Australia's Casey research station in Antarctica, in preparation for a mission that could one day search for life in ocean worlds beyond Earth.

There are moons throughout the solar system believed to be covered in deep oceans hidden beneath thick, frozen surfaces. Scientists like Kevin Hand, JPL lead scientist on the BRUIE project, believe that these lunar oceans, such as those on Jupiter's moon Europa and Saturn's moon Enceladus, may be the best places to look for life in our solar system. But first, they'll need a tough aquatic explorer capable of navigating solo through an alien ocean locked under ice sheets that could be 6 to 12 miles (10 to 19 kilometers) thick.

"The ice shells covering these distant oceans serve as a window into the oceans below, and the chemistry of the ice could help feed life within those oceans. Here on Earth, the ice covering our polar oceans serves a similar role, and our team is particularly interested in what is happening where the water meets the ice," said Hand.