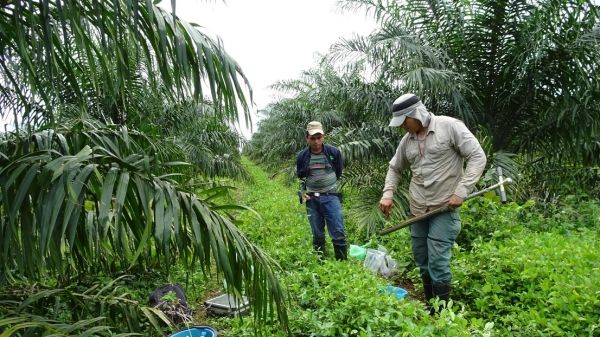 Turning an abandoned pasture into a palm tree plantation can be carbon neutral, according to a new study by EPFL and the Swiss Federal Institute for Forest, Snow and Landscape Research (WSL).

These findings, based on measurements of 56-year-old palm tree plantations in Colombia, suggest we may be able to find sustainable alternatives to deforestation for the production of palm oil – a practice currently under fire by environmentalists.

Scientists from EPFL and WSL have been studying soils in oil palm cultivation for years, in an effort to develop more sustainable methods for growing this crop. Palm oil production has been criticized by environmentalists because of its large carbon footprint and negative impact on biodiversity. For instance, in Indonesia and Malaysia – the world’s two biggest producers – it has directly or indirectly caused large-scale deforestation, thereby reducing biodiversity and releasing significant amounts of CO2 into the atmosphere. And planting oil palm trees in the deforested areas does not make up for the lost carbon storage capacity, according to a 2018 study carried out by EPFL and WSL.

But the findings of a new study by EPFL and WSL – appearing today in Science Advances – indicate there may be a carbon-friendly alternative to deforestation. The scientists investigated oil palm crops that had been planted on former pastures in the Los Llanos region of Colombia, the world’s fourth-largest palm oil producer. There, large areas of pastures – which themselves had been planted in the past on savannas – were replaced by oil palm plantations 56 years ago. By calculating the crops’ carbon footprint since then, the scientists found that the total carbon storage – taking into account both vegetation and soil stocks – was unchanged relative to when the land had been used for pastures.