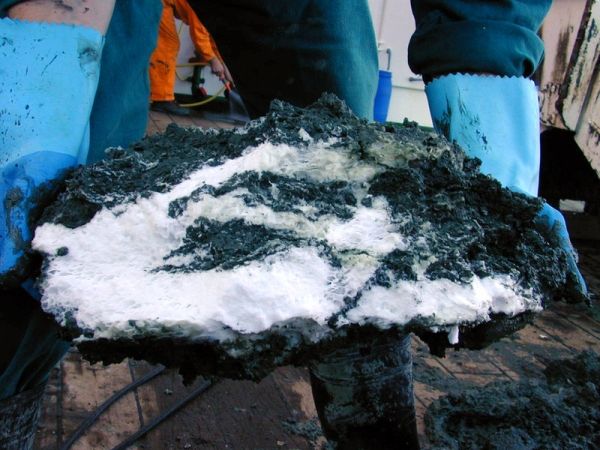 Natural gas, stored in so-called gas hydrates, can be found on many continental margins worldwide.

Natural gas, stored in so-called gas hydrates, can be found on many continental margins worldwide. As part of the MIGRATE (Marine Gas Hydrates: An Indigenous Resource of Natural Gas for Europe) project funded by the European Commission, an inventory of deposits in European waters has now been compiled for the first time. First results of the study which was coordinated by GEOMAR Helmholtz Centre for Ocean Research Kiel were now published in the international journal Marine and Petroleum Geology.

End of the 1990s gas hydrates became widely known under the term “burning ice”. The combination of water and methane, which occurs under high pressure and at low temperatures as an ice-like solid structure in marine sediments, is a fossil energy source that could cover the increasing demand for natural gas in the coming decades. This might be on the short-term the only way to substitute coal as an energy supplier within the framework of the “energy turnaround”, as long as renewable energies cannot completely cover the energy demand. Worldwide, large projects are currently investigating gas volumes and the feasibility of exploiting gas hydrate deposits.

In the MIGRATE (Marine Gas Hydrates: An Indigenous Resource of Natural Gas for Europe) project, funded by the European Commission, for the first time a Europe-wide inventory of hydrate deposits, the workflows required to exploit them and the technologies available have been assessed. MIGRATE brings together scientists, technicians and engineers from all over Europe in one network project and enables an overview and consolidation of individual research studies in a Europe-wide consortium. As a result, an overview of gas hydrate deposits in Europe and guidelines for the exploration and production of gas hydrates are now available for the first time.