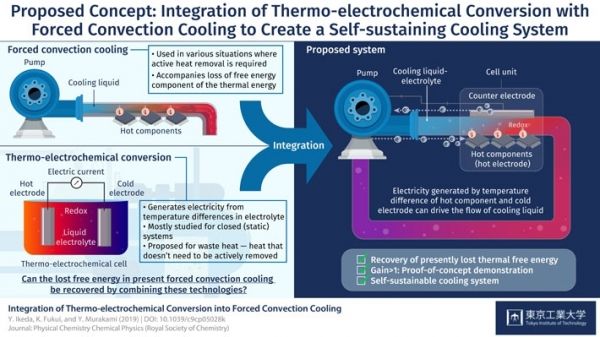 Active cooling is crucial in most modern technologies, ranging from microprocessors in data centers to turbines and engines.

Active cooling is crucial in most modern technologies, ranging from microprocessors in data centers to turbines and engines. Forced convection cooling, which circulates a coolant fluid over the surface of a hot object, is effective for meeting such cooling requirements but demands a pumping power to send the coolant through the heat generating section. However, active cooling — fast removal of a large quantity of thermal energy in the heat source under a large temperature difference — promptly destroys the free-energy component of the thermal energy, which is an energy portion that can be converted to an electric work. This issue concomitant with forced convection cooling has remained unaddressed despite the widespread use of forced convection cooling in the current world.

One specific method for converting wasted heat — the heat that doesn't need to be actively removed — into electrical energy through liquid chemical reactions has been studied for several decades. This method, called thermo-electrochemical conversion, involves the submergence of two electrodes held at different temperatures in a liquid electrolyte encased in a closed vessel, where a reversible reduction–oxidation ("redox") reaction occurs. This reaction generates an electric current through an external circuit. Research on thermo-electrochemical conversion has been mostly carried out for static fluids.

In this study, a team of researchers from Tokyo Institute of Technology integrated thermo-electrochemical conversion with forced convection cooling to partly recover the aforementioned free-energy portion, presently lost during forced-convection cooling, in the form of electric power. In the cell developed by these researchers, the electrolyte liquid is flown as a coolant between two parallel electrodes, one of which is a heat-releasing object to be cooled. The redox reaction occurring in the cell generates electricity; this electricity can be used to drive the coolant flow through the cell. This work delves into uncharted territory, as the concept and feasibility of self-sustaining liquid-cooling system have not been previously demonstrated.