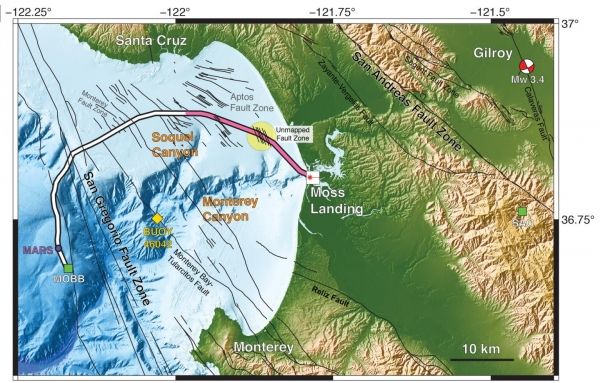 In a paper appearing this week in the journal Science, researchers from the University of California, Berkeley, Lawrence Berkeley National Laboratory (Berkeley Lab), Monterey Bay Aquarium Research Institute (MBARI) and Rice University describe an experiment that turned 20 kilometers of undersea fiber-optic cable into the equivalent of 10,000 seismic stations along the ocean floor. During their four-day experiment in Monterey Bay, they recorded a 3.5 magnitude quake and seismic scattering from underwater fault zones.

Their technique, which they had previously tested with fiber-optic cables on land, could provide much-needed data on quakes that occur under the sea, where few seismic stations exist, leaving 70% of Earth’s surface without earthquake detectors.

“There is a huge need for seafloor seismology. Any instrumentation you get out into the ocean, even if it is only for the first 50 kilometers from shore, will be very useful,” said Nate Lindsey, a UC Berkeley graduate student and lead author of the paper.