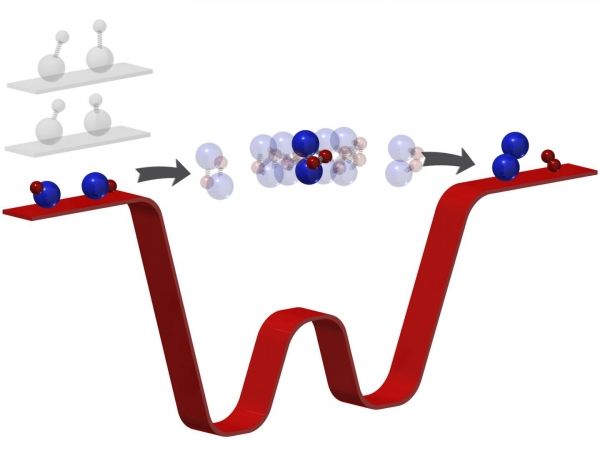 The coldest chemical reaction in the known universe took place in what appears to be a chaotic mess of lasers.

The coldest chemical reaction in the known universe took place in what appears to be a chaotic mess of lasers. The appearance deceives: Deep within that painstakingly organized chaos, in temperatures millions of times colder than interstellar space, Kang-Kuen Ni achieved a feat of precision. Forcing two ultracold molecules to meet and react, she broke and formed the coldest bonds in the history of molecular couplings.

“Probably in the next couple of years, we are the only lab that can do this,” said Ming-Guang Hu, a postdoctoral scholar in the Ni lab and first author on their paper published today in Science. Five years ago, Ni, the Morris Kahn Associate Professor of Chemistry and Chemical Biology and a pioneer of ultracold chemistry, set out to build a new apparatus that could achieve the lowest temperature chemical reactions of any currently available technology. But they couldn’t be sure their intricate engineering would work.

Now, they not only performed the coldest reaction yet, they discovered their new apparatus can do something even they did not predict. In such intense cold—500 nanokelvin or just a few millionths of a degree above absolute zero—their molecules slowed to such glacial speeds, Ni and her team could see something no one has been able to see before: the moment when two molecules meet to form two new molecules. In essence, they captured a chemical reaction in its most critical and elusive act.

Chemical reactions are responsible for literally everything: breathing, cooking, digesting, creating energy, pharmaceuticals, and household products like soap. So, understanding how they work at a fundamental level could help researchers design combinations the world has never seen. With an almost infinite number of new combinations possible, these new molecules could have endless applications from more efficient energy production to new materials like mold-proof walls and even better building blocks for quantum computers.

Image: Chemical reactions transform reactants to products through an intermediate state where bonds break and form. Often too short-lived to observe, this phase has so-far eluded intimate investigation.

By "freezing out" the rotation, vibration, and motion of the reactants (here, potassium-rubidium molecules) to a temperature of 500 nanokelvin (barely above absolute zero temperature), the number of energetically allowed exits for the products is limited. "Trapped" in the intermediate for far longer, researchers can then observe this phase directly with photoionization detection. This technique paves the way towards the quantum control of chemical reactions with ultracold molecules. (Credit: Ming-Guang Hu)