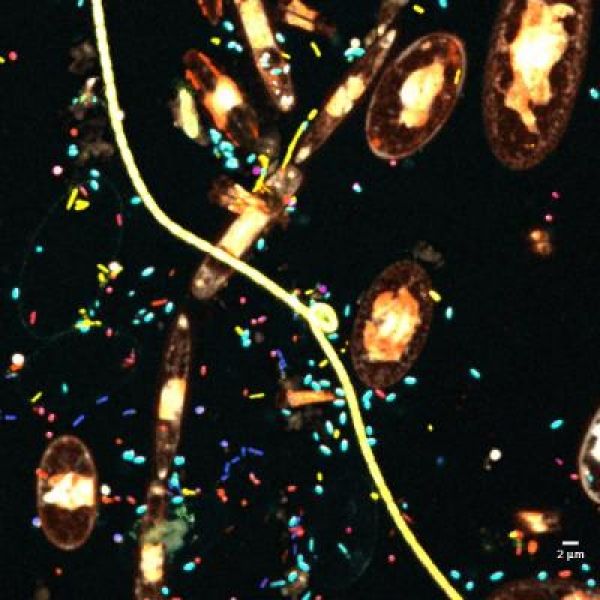 Millions of tons of plastic trash are fouling the world’s ocean, most of it tiny pieces of microplastic less than a quarter-inch in size.

Millions of tons of plastic trash are fouling the world’s ocean, most of it tiny pieces of microplastic less than a quarter-inch in size. Even the smallest marine animals can ingest these microplastics, potentially threatening their survival.

Marine microplastics aren’t floating solo, either – they quickly pick up a thin coating of bacteria and other microbes, a biofilm known as “The Plastisphere.” These biofilms can influence the microplastics’ fate – causing them to sink or float, or breaking them down into even tinier bits, for example. They can even make the plastic smell or taste like food to some marine organisms. But very little is known about what kinds of microbes are in the Plastisphere, and how they interact with one another and the plastic.

Now, using an innovative microscopy method developed at the Marine Biological Laboratory (MBL), Woods Hole, scientists have revealed the structure of the microbial communities coating microplastic trash collected from a variety of ocean sites. The team, led by Linda Amaral-Zettler (who coined the term “Plastisphere”), Jessica Mark Welch, and Cathleen Schlundt, reports its results this week in Molecular Ecology Resources.

The MBL team built upon an fluorescence imaging technique developed by Mark Welch and colleagues to literally see the spatial organization of microbes on the plastic samples. They did so by designing probes that fluorescently lit up and targeted major, known bacterial groups in the Plastisphere.