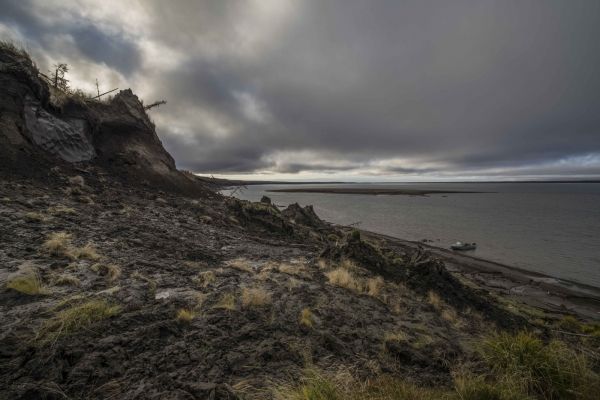 The Kolyma River in eastern Siberia was sampled for a global study of black carbon in rivers and oceans by a team of researchers.

We can probably all agree that the deep sea is not on fire. But the charred, powdery soot that results from burning things like forests or fossil fuels makes up an important part of the carbon dissolved in the ocean. So how in the world did that soot, which scientists call black carbon, get there?

Thanks to charcoal found in the fossil record, scientists know that wildfires have happened for millions of years, since the first trees appeared. The soot that’s left over—black carbon—makes up about 10% of all the carbon in Earth’s soil, and until recently, scientists thought that rivers were washing it into the ocean.

Aron Stubbins, an associate professor of marine and environmental sciences at Northeastern, teamed up with a group of researchers who tested the long-established idea that rivers eventually transport black carbon into the ocean.

The team’s findings, published in Nature Communications, show that the dissolved black carbon found in rivers doesn’t match the readings of black carbon dwelling in the ocean.