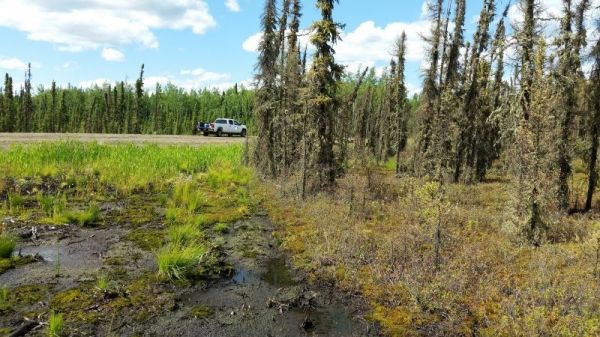 Roads built through acidic wetlands may make greenhouse gas emissions from the wetlands spike by damming natural water flow, according to a new study.

As plants die in bogs or fens—two types of wetlands—they sink into an acidic and low-oxygen environment where microorganisms can’t break them down as quickly as they would in other habitats. Over time, partially decomposed plants accumulate and create peat, a brown deposit that looks like soil. Its high carbon content allows it to burn.

Peat wetlands, also known as peatlands, store twice as much carbon as forests despite covering less than 3 percent of land. They are most common across the northern reaches of North America and Europe, where workers remove bricks of muddy peat for use as fertilizer or some countries burn it as fuel to heat homes and businesses.

Now, new research in AGU’s Journal of Geophysical Research: Biogeosciences suggests building roads across these areas for transport and to extract natural resources may boost emissions of methane, a potent greenhouse gas, up to 49 times the natural level. Methane in the atmosphere absorbs heat more effectively than carbon dioxide, meaning it poses a greater threat for global climate change.