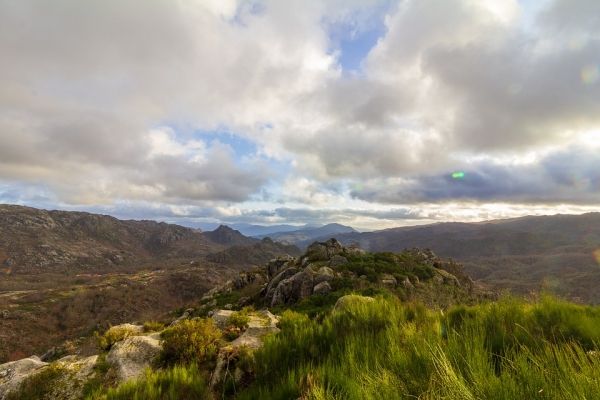 People have lived in Castro Laboreiro, where northern Portugal borders Spain, long enough to have built megaliths in the mountainous countryside and a pre-Romanesque church, from 1,100 years ago, in the village itself.

People have lived in Castro Laboreiro, where northern Portugal borders Spain, long enough to have built megaliths in the mountainous countryside and a pre-Romanesque church, from 1,100 years ago, in the village itself. But the old rural population has dwindled away, leaving behind mostly elders yearning for their vanishing culture.

Roughly half the area once grazed by sheep, goats, and cattle is now unused and reverting to nature, meaning that wolves, bears, wild boars, and other species have rebounded in their old habit. Iberian ibex and griffon vultures thrive where they were extinct, or nearly so, as recently as the 1990s. So what feels like loss to some village residents, looks to others like a great recovery.

Places like Castro Laboreiro are of course everywhere. Abandonment of rural lands has become one of the most dramatic planet-wide changes of our time, affecting millions of square miles of land. Partly it’s a product of rural flight, and the economic, social, and educational appeal of cities. Partly it’s about larger forces like climate change and globalization of the food supply chain. But the result, according to a new study in Nature Ecology and Evolution, is that the global footprint of agriculture has “started decreasing in size during the past two decades, with more land now being abandoned from agriculture than converted to it, especially in Western Europe and North America.” (This change doesn’t appear to have affected global food supply, at least not yet, because the land lost was marginal to start with, and farming elsewhere has become more productive.)

The study, by researchers from the University of Minnesota, found that abandoned lands can take decades or even centuries to recover their original biodiversity and productivity. But it termed land abandonment “an unprecedented opportunity for ecological restoration efforts to help to mitigate a sixth mass extinction and its consequences for human wellbeing.” Indeed, by some accounts, a more aggressive—and evidence-based — approach to restoring abandoned lands could bring about major progress in both the climate and extinction emergencies.