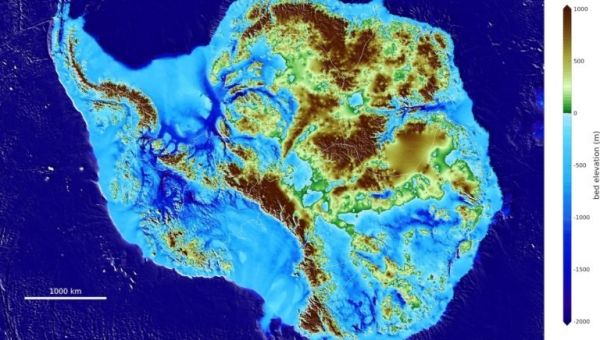 A University of California, Irvine-led team of glaciologists has unveiled the most accurate portrait yet of the contours of the land beneath Antarctica’s ice sheet – and, by doing so, has helped identify which regions of the continent are going to be more, or less, vulnerable to future climate warming.

Among the most striking results of the BedMachine project are the discovery of stabilizing ridges that protect the ice flowing across the Transantarctic Mountains; a bed geometry that increases the risk of rapid ice retreat in the Thwaites and Pine Island glaciers sector of West Antarctica; a bed under the Recovery and Support Force glaciers that is hundreds of meters deeper than previously thought, making those ice sheets more susceptible to retreat; and the world’s deepest land canyon below Denman Glacier in East Antarctica.

“There were lots of surprises around the continent, especially in regions that had not been previously mapped in great detail with radar,” said lead author Mathieu Morlighem, UCI associate professor of Earth system science. “Ultimately, BedMachine Antarctica presents a mixed picture: Ice streams in some areas are relatively well-protected by their underlying ground features, while others on retrograde beds are shown to be more at risk from potential marine ice sheet instability.”