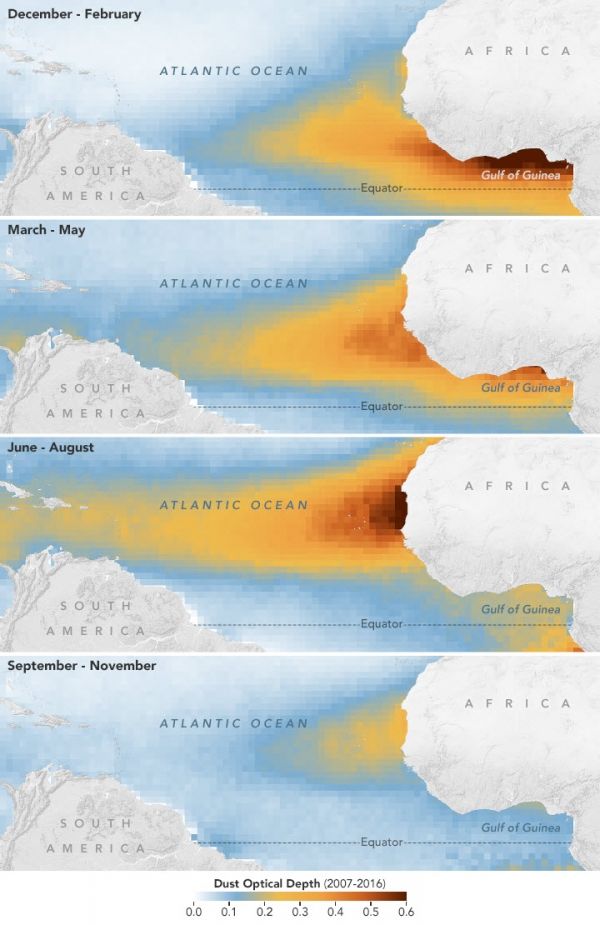 Satellite observations show how far winds normally spread North African dust particles before rain and gravity pull them down to the ocean.

Individual particles of dust are small and easy to ignore, but on a grand scale, atmospheric dust directly affects all of us, and the planet, in many ways.

Particles of dust are typically comprised of metal oxides, clays, and carbonates. They most often accumulate in low-lying desert basins, often dried rivers or lakes. When winds lift particles up, they can spread across thousands of miles, circling the planet and fertilizing key parts of oceans and rainforests with critical nutrients, notably iron. They also can spread diseases, trigger asthma and other respiratory health problems, and darken skies so much that they cause traffic accidents and problems for pilots.

One of the most difficult to study—but far reaching—effects of dust is its influence on weather and climate. Dust particles can change air temperatures by blocking light, influence where clouds form and how they behave, and affect whether hurricanes or other types of storms break out. By fertilizing the sea, dust also helps influence the size and frequency of blooms of carbon dioxide-consuming phytoplankton, which could play a role in dialing global temperatures up or down.