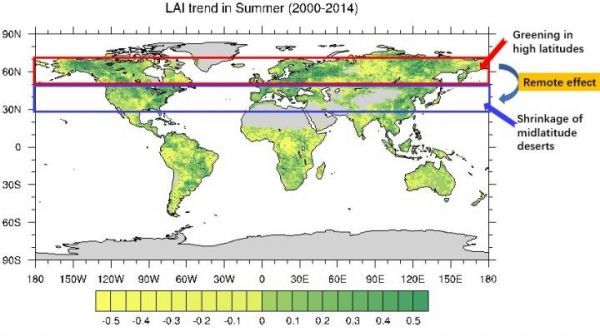 Desertification has always been a serious challenge for human beings, especially in arid and semi-arid regions.

Desertification has always been a serious challenge for human beings, especially in arid and semi-arid regions. Projections from CMIP5 support the expansion of arid and semi-arid regions with increasing greenhouse gas concentrations. Interestingly, besides inducing a stronger greenhouse effect, increasing carbon dioxide is also leading to global vegetation greening, especially in high latitudes, by the fertilization effect. However, it is still unknown whether greening in high latitudes could affect midlatitude deserts.

In a paper recently published in Atmospheric and Oceanic Science Letters, Dr. Yongli He from the department of Atmospheric Science, Lanzhou University, and his coauthors, try to address this question based on their work on the remote effect of greening in high latitudes.

“We investigated the remote effects of greening at high latitudes by using a two-dimensional energy balance model. We decreased the albedo in high latitudes to represent the greening phenomenon, and then investigated the changes in the boundaries of midlatitude deserts. We found that the midlatitude deserts retreated significantly at the southern boundary, while the polar ice belts and low-latitude vegetation belts expanded,” says Dr. He.

Image: Schematic diagram of the remote effect of high-latitude greening on midlatitude deserts. (Credit: Yongli He)