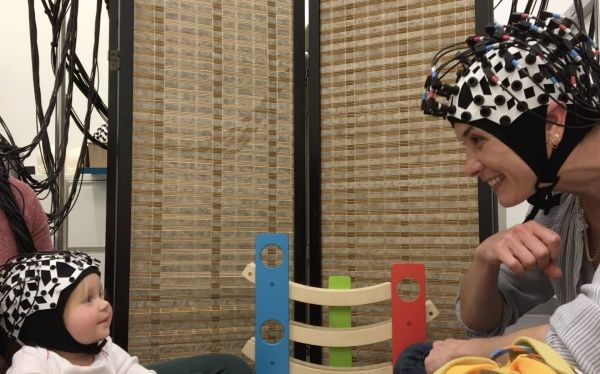 A team of Princeton researchers has conducted the first study of how baby and adult brains interact during natural play, and they found measurable similarities in their neural activity.

A team of Princeton researchers has conducted the first study of how baby and adult brains interact during natural play, and they found measurable similarities in their neural activity. In other words, baby and adult brain activity rose and fell together as they shared toys and eye contact. The research was conducted at the Princeton Baby Lab, where University researchers study how babies learn to see, talk and understand the world.

“Previous research has shown that adults’ brains sync up when they watch movies and listen to stories, but little is known about how this ‘neural synchrony’ develops in the first years of life,” said Elise Piazza, an associate research scholar in the Princeton Neuroscience Institute (PNI) and the first author on a paper published Dec. 17, 2019, in Psychological Science.

Studying real-life, face-to-face communication between babies and adults is quite difficult. Most past studies of neural coupling, many of which were conducted in Hasson’s lab, involved scanning adults’ brains with functional magnetic resonance imaging (fMRI), in separate sessions, while the adults lay down and watched movies or listened to stories.

Photo: It’s not your imagination — you and your baby really are on the same wavelength. A team of Princeton researchers has developed a way to measure baby and adult brain activity during natural interaction. In their experiment, an adult spent five minutes playing, singing songs and reading “Goodnight Moon” with babies and toddlers, as the researchers measured neural synchrony using a method called functional near-infrared spectroscopy. Photo by Elise Piazza, Princeton Baby Lab