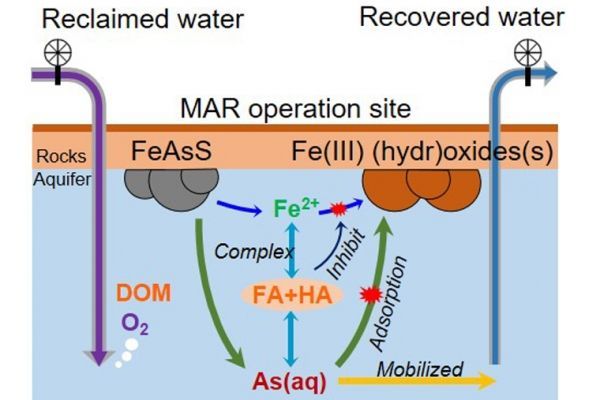 To replenish groundwater, many municipalities inject reclaimed water into depleted aquifers. The injected water has been purified by secondary wastewater treatment, and, in some cases, the water has been treated through tertiary processes and can be clean enough to drink directly.

The original water in the aquifer was chemically stable, in equilibrium with the surrounding rocks, and was slowly recharged by natural processes (water infiltration). However, when more groundwater is consumed than the natural processes can restore, engineered recharging with purified, reclaimed water is needed. Unfortunately, over time, the reclaimed water sometimes becomes contaminated.

A research team in the McKelvey School of Engineering at Washington University in St. Louis, led by Young-Shin Jun, professor of energy, environmental and chemical engineering; and Xuanhao Wu, a doctoral student in Jun’s lab, has determined how the potable water used to recharge an aquifer can become contaminated with dangerous levels of arsenic. The research was published in Environmental Science and Technology.