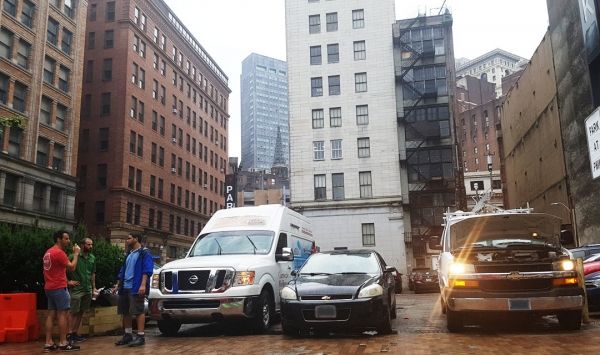 CMU researchers have found a missing source of emissions that may explain roughly half of secondary organic aerosol.

Air quality models have long failed to accurately predict atmospheric levels of secondary organic aerosol, which comprises a substantial fraction of the fine particulate matter in cities. But CMU researchers have found a missing source of emissions that may explain roughly half of that SOA, closing much of the model-measurement gap.

Despite the prominent health threat posed by fine particulate pollution, fundamental aspects of its formation and evolution continue to elude scientists.

This is true especially for the organic fraction of fine particles (also called aerosol), much of which forms as organic gases are oxidized by the atmosphere. Computer models under-predict this so-called “secondary” organic aerosol (SOA) in comparison to field measurements, indicating that the models are either missing some important sources or failing to describe the physical processes that lead to SOA formation.

New research from Carnegie Mellon University in collaboration with the National Oceanic and Atmospheric Administration (NOAA) sheds light on an under-appreciated source of SOA that may help close this model-measurement gap. Published in Environmental Science & Technology, the study shows that volatile organic compounds (VOCs) not traditionally considered may contribute as much or more to urban SOA as long-accounted for sources like vehicle emissions and respired gases from tree leaves.