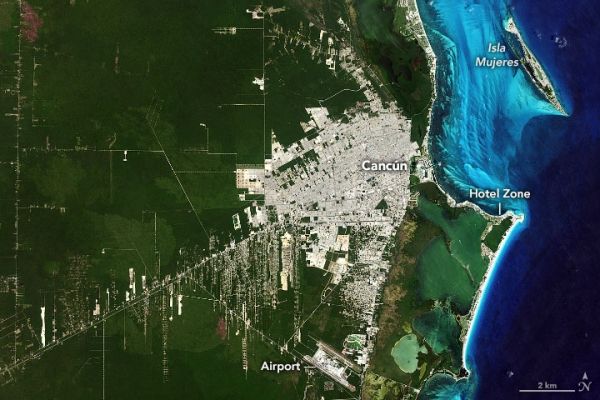 Once one of the poorest regions of Mexico, Cancún is now a bustling tourist city with millions of visitors each year.

Fifty years ago, Cancún was virtually unknown to the world. With a population of roughly 100 people, the town was located in one of the poorest regions of Mexico. It had odd-shaped sand dunes and a coast occupied by marshes, mangroves, and a snake-infested jungle. Over the past five decades, though, Cancún has been transformed into one of Mexico’s top tourist attractions. The growth didn’t happen by chance.

In the late 1960s, the Mexican government took an interest in developing the country’s tourism sector to boost the economy. To determine the perfect place, government officials analyzed statistics from several successful resort locations such as Miami Beach and Acapulco. They compiled information on the number of tourists, number of hotel rooms, average temperatures, average rainfall, and hurricane events and fed them into a computer program. The computer selected several candidates for a new resort town. Officials then visited each site along Mexico’s approximately 10,000 kilometers (6,000 miles) of coastline to personally inspect the beaches, swimming, and living conditions.

In the end, they selected Cancún because it had good weather year-round, blue seas, and white sand beaches. It was also located near great archeological treasures, such as the Mayan ruins at Chichen Itza and Tulum. It also had a high level of poverty and no existing industry.