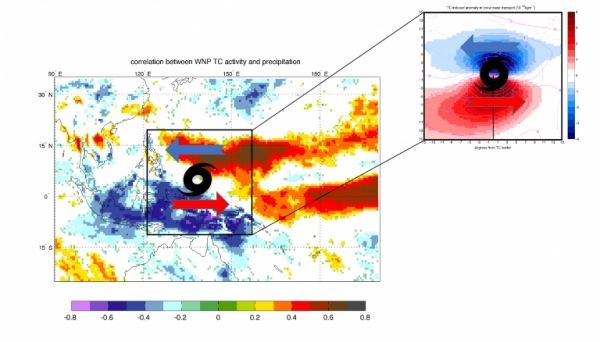 Tropical cyclones in the North West Pacific can dry the archipelagos of Southeast Asia, as they reduce humidity in the area with their associated winds. A new study of the CMCC Foundation shows causes and implications of this relation.

Tropical cyclones are important players within the Earth’s climate system. While literature usually investigates their role in determining flood events and inducing precipitations, a new study led by the CMCC Foundation – Euro-Mediterranean Center on Climate Change points out for the first time that they can also create drying effects in other regions, due to induced zonal wind anomalies.

Through observational data for the period 1979-2015, the study shows that tropical cyclones in the West-North Pacific not only increase precipitations in the areas where they transit from June to August, but also decrease precipitations in the Maritime Continent – the region between the Indian and Pacific Oceans including the Southeast Asian archipelagos – that is not directly affected by typhoons. This is explained by an eastward water transport anomaly in the equatorial region of the North West Pacific, induced by tropical cyclones developing in the basin.

“Tropical cyclone-associated winds that move around its centre reach 200-300 km/h. Winds move not only the air mass but also the water present in the air mass itself and they can involve an area of about 10.000 km from the centre of the cyclone”, explains Dr. Scoccimarro, senior researcher at the CMCC Foundation under the Climate Simulation and Prediction Division and principal investigator of the study. “In a tropical cyclone winds spiral towards the center in a counterclockwise direction in the Northern Hemisphere. Therefore, in the southern part of the cyclone, the vertically integrated water content is moved to the East, while in the northern part of the cyclone water is moved to the West”.