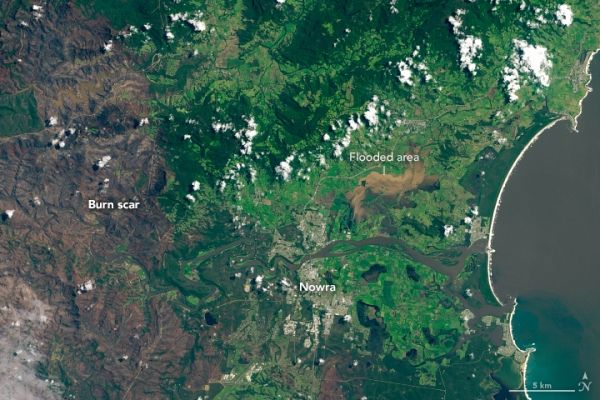 A season of extremes in eastern Australia took another dramatic turn in mid-February 2020.

A season of extremes in eastern Australia—punctuated by raging wildfires, scorching summer temperatures, and long-term drought—took another dramatic turn in mid-February 2020. In just a few days, parts of Queensland and New South Wales (NSW) were soaked by more rain than many areas saw in all of 2019. The deluge swelled rivers out of their banks and swamped parched lands, leading to muddy floods in many coastal regions. More rain is expected later this week.

The Australian Bureau of Meteorology reported widespread rainfall totals above 200 millimeters (8 inches) in just 24 hours, with some reports as high as 500 to 700 millimeters (20 to 28 inches) across a week. Successive storm fronts raced inland from February 5-10 as “a coastal trough positioned parallel to the east Australian coast strengthened, maintaining widespread showers and rain.”

On January 25 and February 10, 2020, the Operational Land Imager (OLI) on Landsat 8 acquired images from the southeast coast of New South Wales. The images show flooded lands around the farming communities of Nowra and Bomaderry (about 160 kilometers/100 miles southwest of Sydney), one of the few areas visible through extensive cloud cover. Note the burned land on the left side of the image, a scar from the severe 2019-20 fire season. Click here for aerial photos and video of the scene within the Landsat imagery.