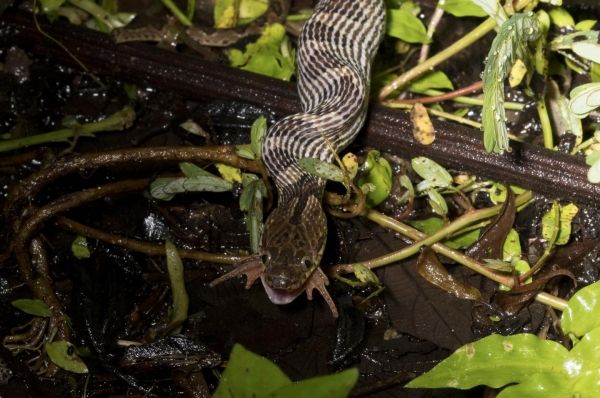 Since 1998, scientists have documented the global loss of amphibians.

Since 1998, scientists have documented the global loss of amphibians. More than 500 amphibian species have declined in numbers, including 90 that have gone extinct, due to the fungal pathogen Batrachochytrium, commonly known as chytrid.

A new study by researchers from the University of Maryland and Michigan State University shows, for the first time, the ripple effects of amphibian losses on snakes. The results, published in the February 14, 2020, issue of the journal Science, reveal that after chytrid swept through a remote forest in Panama, decimating frog populations, the number of snake species scientists detected declined dramatically, causing the snake community to become more homogenized.

“This study highlights the invisibility of other changes that are occurring as a result of losing amphibians,” said Karen Lips, a professor of biology at UMD and a co-author of the study.

Many snakes rely on frogs and frog eggs as part of their diet, so the researchers expected a decline in frogs to impact snake populations. But the slithery reptiles are notoriously cryptic and difficult to study in the wild. How snakes fare following a chytrid epidemic was mostly a matter of conjecture before this study.

Image: A cat-eyed snake eats a toad in Panama. Many snakes depend on amphibians and their eggs for nutrition. (Credit: Karen Warkentin)