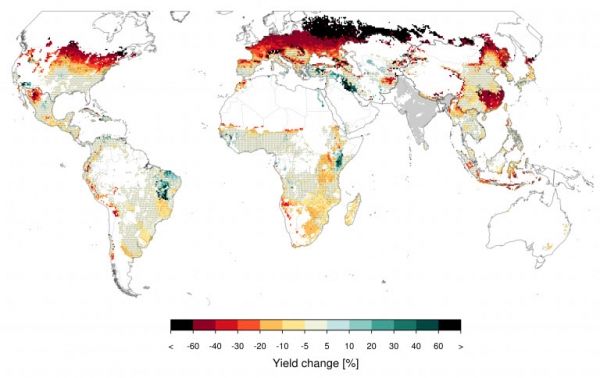 Soot from firestorms would reduce faraway crop production for years.

The concept of nuclear winter—a years-long planetary freeze brought on by airborne soot generated by nuclear bombs—has been around for decades. But such speculations have been based largely on back-of-the-envelope calculations involving a total war between Russia and the United States. Now, a new multinational study incorporating the latest models of global climate, crop production and trade examines the possible effects of a less gargantuan but perhaps more likely exchange between two longtime nuclear-armed enemies: India and Pakistan. It suggests that even a limited war between the two would cause unprecedented planet-wide food shortages and probable starvation lasting more than a decade. The study appears this week in the journal Proceedings of the National Academy of Sciences.

Of an estimated 14,000 nuclear warheads worldwide, close to 95 percent belong to the United States and Russia. India and Pakistan are thought to have about 150 each. The study examines the potential effects if they were to each set off 50 Hiroshima-size bombs—less than 1 percent of the estimated world arsenal.

In addition to direct death and destruction, the authors say that firestorms following the bombings would launch some 5 million tons of soot toward the stratosphere. There, it would spread globally and remain, absorbing sunlight and lowering global mean temperatures by about 1.8 degrees C (3.25 F) for at least five years. The scientists project that this would in turn cause production of the world’s four main cereal crops—maize, wheat, soybeans and rice—to plummet an average 11 percent over that period, with tapering effects lasting another five to 10 years.