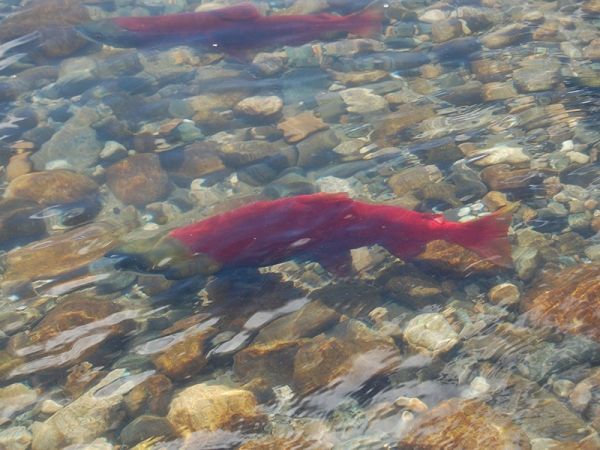 Adult Pacific salmon spend a great portion of their life in the ocean.

Adult Pacific salmon spend a great portion of their life in the ocean. But their life began along the banks of freshwater streams. Their life will end there, as well. These important steps in the lifecycle of salmon play a role in the health of streambank ecosystems.

David D’Amore and a team of scientists studied how different soils respond to the delivery of “salmon-derived nutrients.” These nutrients come from adult salmon returning to their home streams, known as spawning. The study sites were forested ecosystems in Alaska’s coastal temperate rainforest.

Aquatic and terrestrial scientists have studied salmon derived nutrients in these systems, but D’Amore set out to see if there was a difference in how these nutrients worked with varying soil types along the streambanks.

“The fate of salmon-derived nutrients will be influenced by the soil type in the riparian zone,” says D’Amore. “These soils play an important role in the transfer of material and energy between terrestrial and aquatic environments. The nutrients provided by salmon can support microbial and plant growth. In turn, these organisms support the salmon and other animals that rely on food from the streambank ecosystems.”

Image: Pacific salmon spend most of their life in the ocean. These salmon, though, have an impact on the streambank ecosystem when they return to freshwater for spawning.  Credit: kayaklady via morguefile