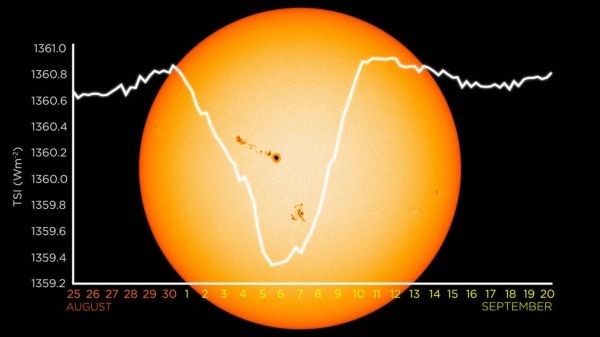 After nearly two decades, the Sun has set for NASA’s SOlar Radiation and Climate Experiment (SORCE), a mission that continued and advanced the agency’s 40-year record of measuring solar irradiance and studying its influence on Earth’s climate.

The SORCE team turned off the spacecraft on February 25, 2020, concluding 17 years of measuring the amount, spectrum and fluctuations of solar energy entering Earth’s atmosphere — vital information for understanding climate and the planet’s energy balance. The mission’s legacy is continued by the Total and Spectral solar Irradiance Sensor (TSIS-1), launched to the International Space Station in December 2017, and TSIS-2, which will launch aboard its own spacecraft in 2023.

“These measurements are important for two reasons,” said Dong Wu, project scientist for SORCE and TSIS-1 at NASA’s Goddard Space Flight Center in Greenbelt, Maryland. “Climate scientists need to know how much the Sun varies, so they know how much change in the Earth’s climate is due to solar variation. Secondly, we’ve debated for years, is the Sun getting brighter or dimmer over hundreds of years? We live only a short period, but an accurate trend will become very important. If you know how the Sun is varying and can extend that knowledge into the future, you can then put the anticipated future solar input into climate models together with other information, like trace gas concentrations, to estimate what our future climate will be.”