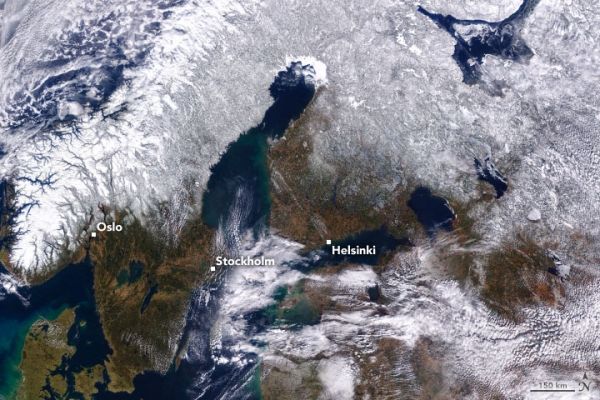 Winter is loosening its grip on the Northern Hemisphere, but the seasonal change in Northern Europe is less dramatic than most years.

Winter is loosening its grip on the Northern Hemisphere, and greens and browns are replacing white on the landscape. But the seasonal change in March 2020 in Northern Europe is less dramatic than most years.

This natural-color satellite image shows snow cover in Scandinavia and the Baltic region in early spring 2020. It is a composite of two images acquired by the Moderate Resolution Imaging Spectroradiometer (MODIS) on NASA’s Terra satellite on March 20 and 21. The composite maximizes the cloud-free area visible from space.

While snow covered much of Norway and the northern parts of Sweden and Finland, the southern end of each country appeared snow-free—including the capital cities of Oslo, Stockholm, and Helsinki. (For a seasonal comparison, see this image from March 2018.) The cities were virtually snow-free for much of winter 2019-20. For example, Helsinki saw no new snowfall in January or February, according to news reports. Numerous ski resorts across Europe had to rely on imported and artificial snow.