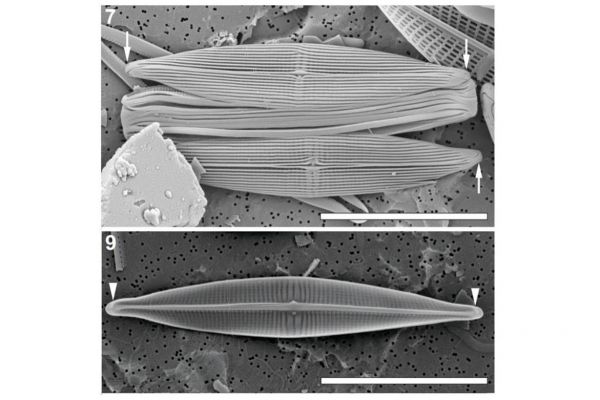 Imagine having a newly discovered species named after you! Proschkinia browderiana, a diatom new to science, was recently named after NOAA Fisheries’ scientist, Dr. Joan Browder. A diatom is a type of algae. This new species was found in the NOAA Biscayne Bay Habitat Focus Area off Miami, Florida as part of the epiphytic algae growing on seagrass in nearshore areas of the Bay. An epiphyte is an organism that grows on the surface of a plant. It gets its energy from sunlight and its nutrients from the air or water around it.

Dr. Browder works out of NOAA’s Southeast Fisheries Science Center in Miami. She has been a NOAA scientist for nearly 42 years. She initiated the study to assess epiphytic community responses to changing water quality regimes. The honor of naming the new species after her was in recognition of her many research accomplishments in Biscayne Bay and other coastal and estuarine ecosystems of south Florida.

The unique diatom was presented with five other new species of Proschkinia in a paper published in the European Journal of Phycology. Dr. Thomas Frankovich of Florida International University discovered and named the new Biscayne Bay diatom species.