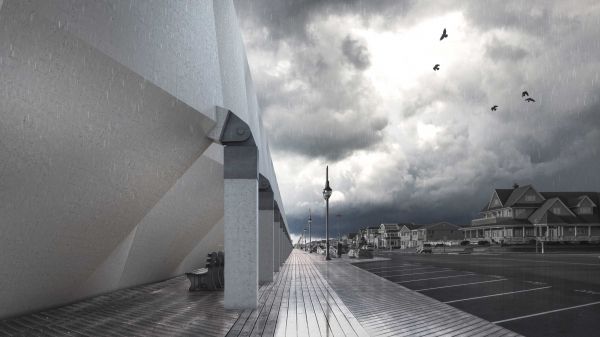 A storm nears the coast, stirring up wind and waves.

A storm nears the coast, stirring up wind and waves. Along the boardwalk that lines the beach, a row of oversize concrete umbrellas begins to tilt downward, transforming from a convenient canopy to a shield against the coming onslaught.

In a new approach to storm surge protection, a Princeton team has created a preliminary design for these dual-purpose kinetic umbrellas. In a study published Mar. 28 in the Journal of Structural Engineering, the researchers used computational modeling to begin evaluating the umbrellas’ ability to withstand an acute storm surge.

As sea levels rise and storms grow stronger, coastal communities are building more seawalls to help protect people and property from extreme flooding. These barriers can be unattractive and restrict access to beaches, but the Princeton team’s umbrellas would provide shade during fair weather and could be tilted in advance of a storm to form a flood barrier.

“This is so much more than just your typical coastal defensive structure,” said lead study author Shengzhe Wang, a Ph.D. student in civil and environmental engineering. “It’s the first time that anyone has really tried to integrate architecture as an inherent component to a coastal countermeasure.”