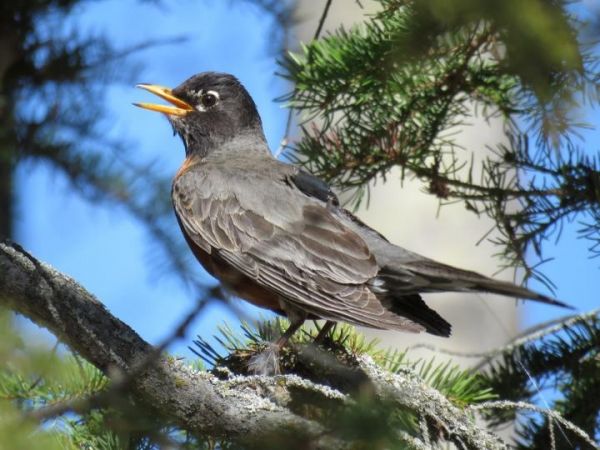 Every spring, American robins migrate north from all over the U.S. and Mexico, flying up to 250 miles a day to reach their breeding grounds in Canada and Alaska.

Every spring, American robins migrate north from all over the U.S. and Mexico, flying up to 250 miles a day to reach their breeding grounds in Canada and Alaska. There, they spend the short summer in a mad rush to find a mate, build a nest, raise a family, and fatten up before the long haul back south.

Now climate change is making seasonal rhythms less predictable, and springtime is arriving earlier in many parts of the Arctic. Are robins changing the timing of their migration to keep pace, and if so, how do they know when to migrate? Although many animals are adjusting the timing of their migration, the factors driving these changes in migratory behavior have remained poorly understood.

A new study, published in Environmental Research Letters, concludes that robin migration is kicking off earlier by about five days each decade. The study is also the first to reveal the environmental conditions along the migration route that help the birds keep up with the changing seasons. Lead author Ruth Oliver completed the work while earning her doctorate at Columbia University’s Lamont-Doherty Earth Observatory.

At Canada’s Slave Lake, a pit stop for migrating birds, researchers have been recording spring migration timing for a quarter century. Their visual surveys and netting censuses revealed that robins have been migrating about five days earlier per decade since 1994.

Image: A robin wearing a GPS tracker on its back. (Credit: Brian Weeks)