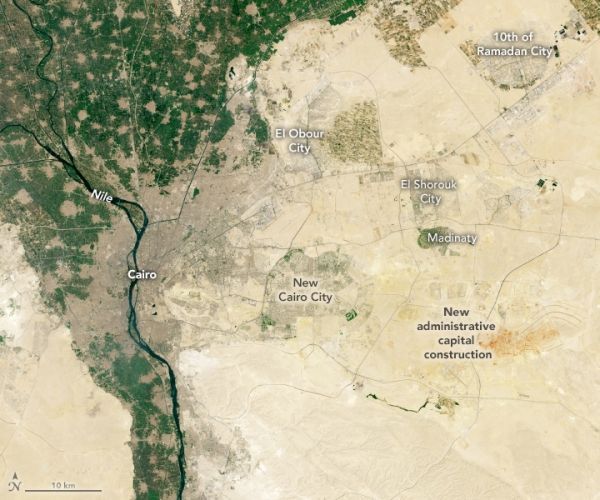 The fast-growing city of Cairo has spilled onto desert plains well beyond the lush floodplain of the Nile River.

For thousands of years, Cairo has been the cultural, political, and financial heart of Egypt. But even for such an indispensable and dynamic city, the pace of change during the past few decades has been remarkable.

Between 1984 and 2020, the population of greater Cairo grew from roughly 12 million people to more than 20 million, making it the largest city in Africa and the 15th largest in the world. Just seventy years ago, it had only 2 million people.

Cairo’s population boom has dramatically changed the city’s footprint. In addition to building upward and outward along the fertile floodplain of the Nile River, development has spread to several new satellite cities built on desert plains east and the west of the city. This pair of natural-color satellite images highlights new development to the east of the Nile River. The Thematic Mapper (TM) on Landsat 5 acquired the first image in 1984; the Operational Land Imager (OLI) on Landsat 8 collected the second image in 2019. With so many roads and buildings, densely developed areas appear gray. Undeveloped desert areas are beige. Farmland is green.