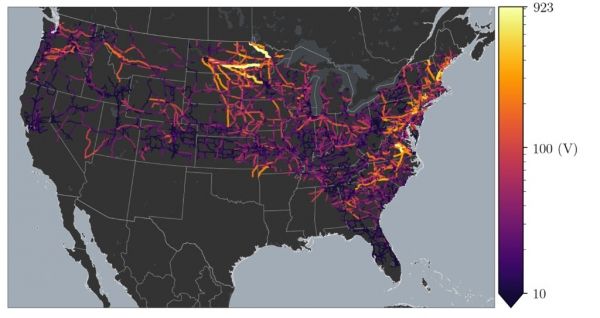 The U.S. Geological Survey released a new report on geoelectric hazards for two-thirds of the contiguous U.S., spanning from the northeast to the west coast of the Nation.

The research, featured in Space Weather, includes a map of voltages that would be induced on the national electric power grid by a geomagnetic superstorm. This research furthers Executive Order 13865 on Coordinating National Resilience to Electromagnetic Pulses, signed by President Trump in March 2019.

“The new voltage map is a critical step forward in our ability to assess the Nation’s risk to geoelectric hazards,” said Jim Reilly, USGS director. “This information will allow utility companies to evaluate the vulnerability of their power-grid systems to magnetic storms and take important steps to improve grid resilience.”

Geomagnetic storms are caused by the dynamic action of the Sun and solar wind on the space environment surrounding the Earth. Magnetic disturbance during such a storm generates electric fields in the Earth's crust and mantle. These electric fields can interfere with the operation of grounded electric power-grid systems.