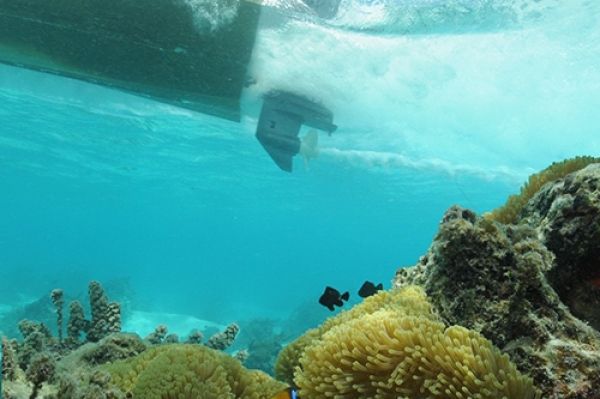 Hormonal changes caused by motorboat noise cause clownfish to hide, skip meals and attack their neighbours - putting damselfish in distress.

Hormonal changes caused by motorboat noise cause clownfish to hide, skip meals and attack their neighbours - putting damselfish in distress.

Working on the reefs around Moorea in French Polynesia, an international team of scientists exposed 40 pairs of clownfish to recordings of natural reef sounds or motorboat noise for up to two days. Motorboat noise caused clownfish to hide in the protective tentacles of their host anemone, move less into open water to feed and to be more aggressive towards domino damselfish that also reside in the anemone.

The researchers – from France, Chile and the UK – also found that noise-affected anemonefish were unable to respond appropriately to a second stressor, likely putting them at greater risk from threats such as predators and climate change.

The study, published in the journal Environmental Pollution, found noise-exposed fish had elevated levels of the stress hormone cortisol and the reproductive hormones testosterone and 11-ketotestosterone, which corresponded with observed behavioural changes. These measurable hormones offer a window into complex behaviours and could be used to develop new noise-mitigation tools.

Read more at University Of Bristol