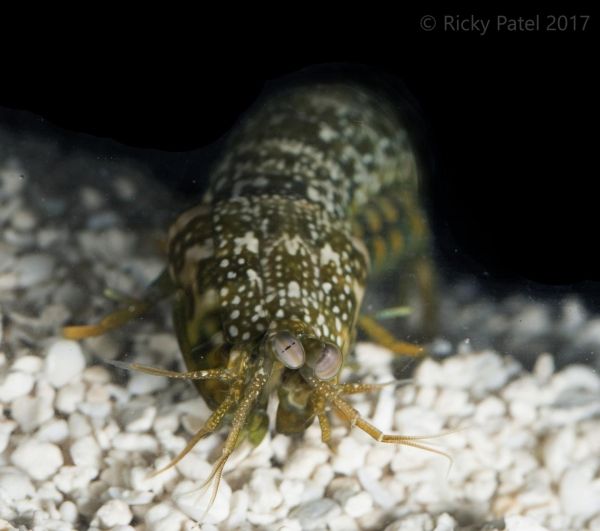 Mantis shrimps have earned fame for their powerful punching limbs, incredibly unusual eyes, and vivid exoskeletons. And, it turns out, they’re also really good at finding their way home. Through a series of painstaking experiments with these often-uncooperative creatures, Rickesh Patel has produced new findings on mantis shrimp navigation, published today in Current Biology.

Patel, a Ph.D. candidate in biological sciences at UMBC, found that the species of mantis shrimp he investigated relies on the sun, patterns in polarized light, and internal cues—in that order—to navigate directly back to their non-descript burrows. These straight-line returns often follow forays that meander and zig zag as the shrimp looks for a meal or a mate. The ability to get home quickly comes in handy when seeking shelter in the presence of a predator, or a perceived one, as Patel noted on his first research fieldwork expedition.

After his first year at UMBC, Patel traveled with Tom Cronin’s lab to Lizard Island in the Great Barrier Reef to collect mantis shrimps for study. “As soon as they notice you, they’ll turn around and zip straight to some sort of shelter,” Patel says. Like a true scientist, “That got me wondering how they go about finding their way home.”

Image: Neogonodactylus oerstedii is a shallow-water species of mantis shrimp. It was the species used in the very first study of mantis shrimp navigation by Rickesh Patel at University of Maryland, Baltimore County. In a creative set of experiments, Patel found that the shrimp use the sun, polarized light patterns, and internal cues (in that order) to determine their distance and direction from their home burrows after trips out to seek food or mates. (Credit: Rickesh Patel)