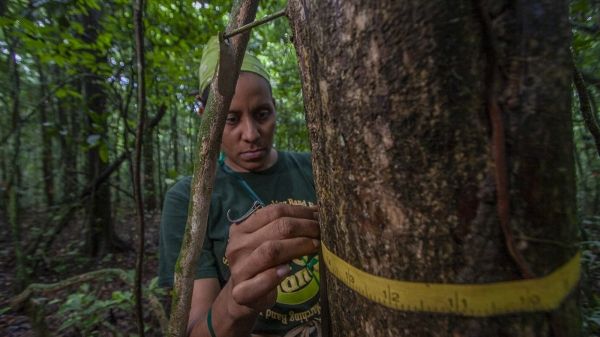 A group of trees that grow fast, live long lives and reproduce slowly account for the bulk of the biomass—and carbon storage—in some tropical rainforests, a team of scientists says in a paper published this week in the journal Science.

The finding that these trees, called long-lived pioneers, play a much larger role in carbon storage than previously thought may have implications in efforts to preserve forests as a strategy to fight climate change. “People have been arguing about whether these long-lived pioneers contribute much to carbon storage over the long term,” said Caroline Farrior, an assistant professor of integrative biology at The University of Texas at Austin and a primary investigator on the study. “We were surprised to find that they do.”

It is unclear the extent to which tropical rainforests can help soak up excess carbon dioxide in the atmosphere produced by burning fossil fuels. Nonetheless, the new study provides insights about the role of different species of trees in carbon storage.

Using more than 30 years’ worth of data collected from a tropical rainforest in Panama, the team has uncovered some key traits of trees that, when integrated into computer models related to climate change, will improve the models’ accuracy. With the team’s improved model, the scientists plan to begin answering questions about what drives forest composition over time and what factors affect carbon storage.

Most existing Earth system models used to forecast global climate decades from now, including those used by the Intergovernmental Panel on Climate Change, represent the trees in a forest as all basically the same.