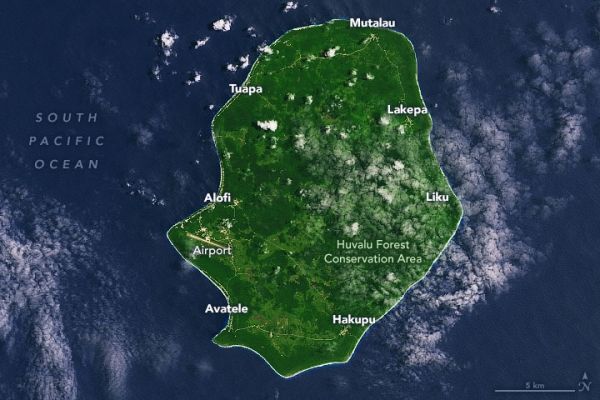 The small, isolated island in the South Pacific Ocean has been named the first “dark-sky nation.”

Since the late 1980s, experts in light pollution have designated more than 100 “dark sky” places around the world. Scattered across communities, parks, and nature and biological reserves, the sites offer respites from city, suburban, and industrial lights, allowing celestial phenomena to be fully appreciated and more clearly viewed. Now, for the first time, an entire country has received official dark-sky status.

In early 2020, the International Dark-Sky Association formally recognized the nation of Niue as an international dark sky sanctuary. Sanctuaries differ from dark sky parks in that they are often extremely remote. That is definitely true of Niue. Isolated in the South Pacific Ocean, the island nation’s closest neighbor is the Tongan island group Vava‘u, more than 430 kilometers (270 miles) to the east. Fiji is about 1200 kilometers (800 miles) away.

Niue’s geographic isolation is certainly helpful for limiting light pollution from outside its borders. But artificial lights still illuminate the homes, businesses, and streets for more than 1,600 people living on the island. To become a dark sky nation—and maintain a pristine view of night sky features like the Milky Way—a team of amateur astronomers collaborated with the island’s government and residents to replace conventional lighting with dimmer, more orange-hued LEDs.