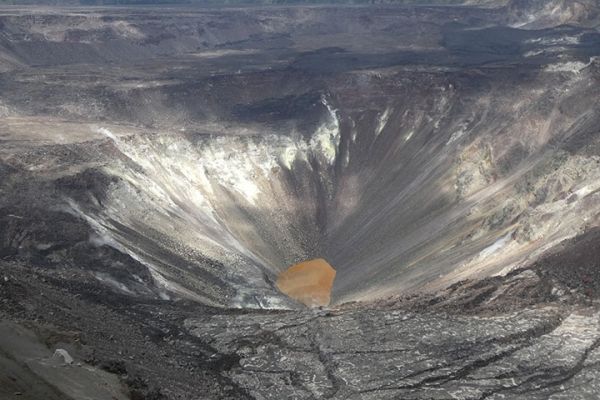 After its lava lake drained and the floor dropped, water has been pooling up in the bottom of Halema‘uma‘u crater for several months.

Between 2010 and 2018, a large lava lake bubbled and spattered within Kilauea’s summit caldera. Then in May 2018, as part of a broader eruption that poured lava from fissures to the east, the lake swiftly drained and part of the caldera floor collapsed. This left a hole nearly as deep as One World Trade Center.

But that was not all Pele had in store. For about a year, the much-deeper and wider Halema‘uma‘u crater was relatively quiet. But in July 2019, helicopter pilots began to notice water pooling into a pond in the lowest part of the crater. Water levels have risen steadily ever since. Today, the lake—now with a rusty brown sheen on its surface due to chemical reactions taking place in the water—has an area larger than five football fields combined and a maximum depth of roughly 30 meters (100 feet).

The sequence of satellite images above shows Halema‘uma‘u crater before the lava lake drained (left), after the caldera floor had collapsed (middle), and after water pooled on the crater floor for nine months (right). The Operational Land Imager (OLI) on Landsat 8 acquired all three natural-color images.