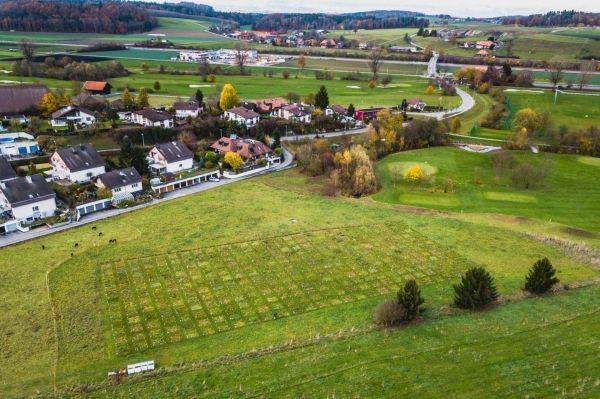 Virtually all of the grasslands in Europe are managed by farmers and whilst traditional management involved periodic cutting and grazing, modern intensive management involves applications of large amounts of nitrogen fertiliser to increase grass production.

Virtually all of the grasslands in Europe are managed by farmers and whilst traditional management involved periodic cutting and grazing, modern intensive management involves applications of large amounts of nitrogen fertiliser to increase grass production. Traditionally managed grasslands contained many plant species, but intensively managed ones contain only a few fast-growing ones that profit from the high nutrient levels. The number of disease-causing plant pathogens also increases with fertilisation. All of these changes are occurring simultaneously; however, ecologists do not know which are most important or what happens when several change at the same time.

The PaNDiv (Pathogens, Nitrogen and Diversity) experiment of the Institute of Plant Sciences at the University of Bern is unique because it manipulates many of these factors to see how they interact with each other. In their first article, "Decomposition disentangled" the authors focussed on litter decomposition, i.e. the speed at which plant matter rots down, which is critical for maintaining a healthy and fertile soil.

"Nitrogen shifted the plant community towards more fast-growing plant species and this in turn made the leaves decompose faster (feeding back more nitrogen to the soil). This indicates that fertilisation effects on functioning are underestimated if we don’t consider the changes in species composition", explains Dr. Noémie Pichon, first author of the study. Litter from fast growing plants decomposes faster because fast growing species invest less in structural tissue and build thinner larger leaves with higher nitrogen content, which are efficient at capturing light but which don't live long. These leaves rot down faster than the small thick leaves produced by slow growing plants. Small nylon bags were filled with litter and left to decompose on each plot to test how fast the biomass produced breaks down. "We ended up sewing more than 800 bags with a sewing machine, but the quality of the results was worth the amount of work" continues Dr. Pichon.

Read more at University of Bern

Image: The PaNDiv Experiment in the small Swiss town of Münchenbuchsee, near the capital Bern. (Credit: © H. Vincent)