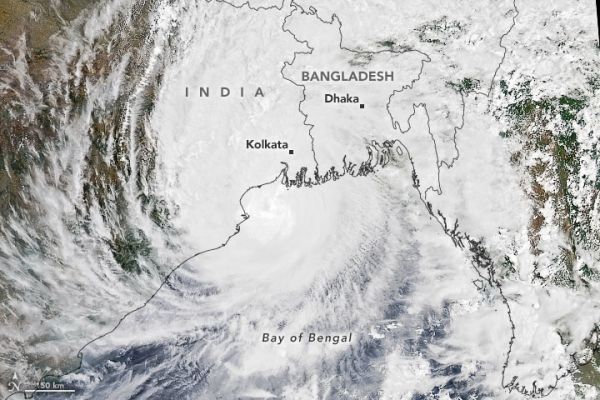 The first tropical cyclone of the 2020 season in the North Indian basin made landfall, delivering substantial storm surge to coastal areas.

Amphan, the first tropical cyclone of the 2020 season in the North Indian basin, made landfall on May 20, 2020. The deadly storm slammed ashore near the border of eastern India and Bangladesh, delivering substantial storm surge to coastal areas.

The storm is visible in this natural-color image, acquired at 1 p.m. India Standard Time (07:30 Universal Time) on May 20 with the Moderate Resolution Imaging Spectroradiometer (MODIS) on NASA’s Aqua satellite. The extremely severe cyclonic storm had sustained winds around the time measuring 90 knots (165 kilometers/105 miles per hour)—equivalent to a category 2 storm on the Saffir-Simpson wind scale.

Winds decreased as Amphan moved north-northeast over land, but the storm remained powerful enough to destroy buildings, uproot trees and crops, and down powerlines.