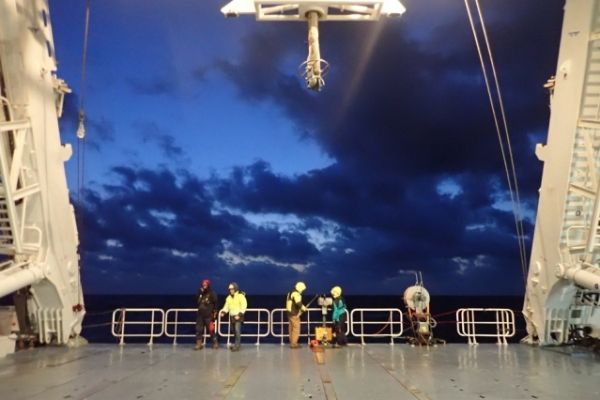 The motion of the ocean is often thought of in horizontal terms, for instance in the powerful currents that sweep around the planet, or the waves that ride in and out along a coastline.

The motion of the ocean is often thought of in horizontal terms, for instance in the powerful currents that sweep around the planet, or the waves that ride in and out along a coastline. But there is also plenty of vertical motion, particularly in the open seas, where water from the deep can rise up, bringing nutrients to the upper ocean, while surface waters sink, sending dead organisms, along with oxygen and carbon, to the deep interior.

Oceanographers use instruments to characterize the vertical mixing of the ocean’s waters and the biological communities that live there. But these tools are limited in their ability to capture small-scale features, such as the up- and down-welling of water and organisms over a small, kilometer-wide ocean region. Such features are essential for understanding the makeup of marine life that exists in a given volume of the ocean (such as in a fishery), as well as the amount of carbon that the ocean can absorb and sequester away.

Now researchers at MIT and the Woods Hole Oceanographic Institution (WHOI) have engineered a lightweight instrument that measures both physical and biological features of the vertical ocean over small, kilometer-wide patches. The “ocean profiler,” named EcoCTD, is about the size of a waist-high model rocket and can be dropped off the back of a moving ship. As it free-falls through the water, its sensors measure physical features, such as temperature and salinity, as well as biological properties, such as the optical scattering of chlorophyll, the green pigment of phytoplankton.

Image: Scientists prepare to deploy an underway CTD from the back deck of a research vessel.  CREDIT: Amala Mahadevan