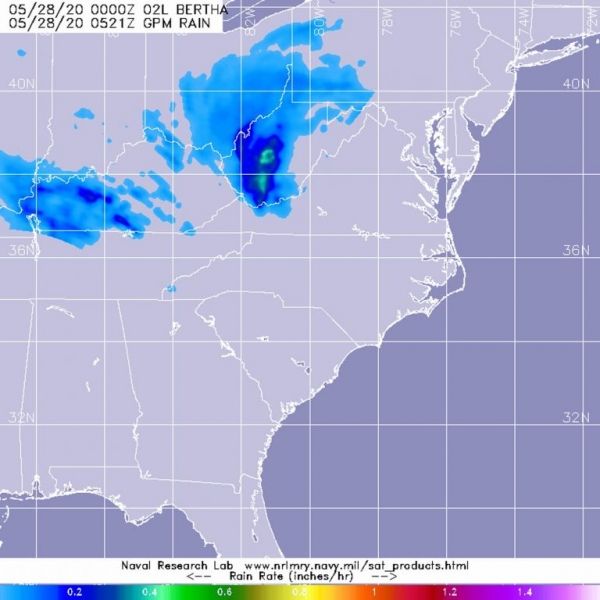 NASA’s GPM core satellite analyzed rainfall generated from post-tropical cyclone Bertha as it continues to move toward the Great Lakes.

NASA’s GPM core satellite analyzed rainfall generated from post-tropical cyclone Bertha as it continues to move toward the Great Lakes.

Bertha formed into a tropical storm on May 27, about 30 miles off the South Carolina coast. By 9:30 a.m. EDT, Bertha made landfall along the coast of South Carolina, east of Charleston. Data from NOAA and CORMP buoys showed that maximum sustained winds increased to near 50 mph (80 kph) before landfall. By 2 p.m. EDT, Bertha weakened to a tropical depression and heavy rainfall spread across the Carolinas. By 11 p.m. EDT, heavy rainfall spread across western North Carolina and southwest Virginia into West Virginia. At that time, the center of Bertha was located about 95 miles (150 km) south-southwest of Roanoke, Virginia. By May 28, Bertha had become a post-tropical cyclone.

Image: The GPM’s core satellite passed over Bertha and analyzed its rainfall rates on May 28 at 1:21 a.m. EDT (0521UTC). GPM found heaviest rainfall over south central West Virginia, where rain was falling at rates of 1 inch (25 mm) per hour. A large area of light rain northwest of the center was falling at around 0.2 inches (less than 5 millimeters) per hour. Credit: NASA/NRL