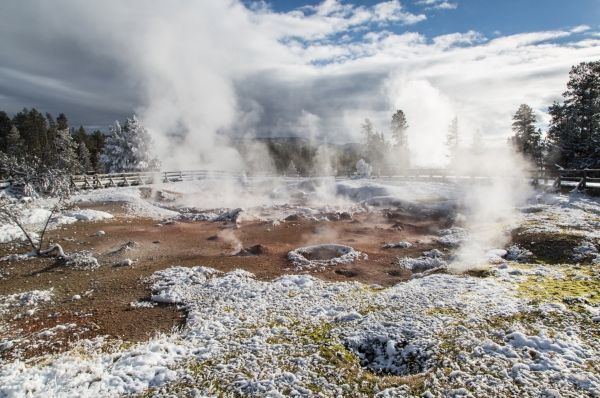 Throughout Earth’s long history, volcanic super-eruptions have been some of the most extreme events ever to affect our planet’s rugged surface.

Throughout Earth’s long history, volcanic super-eruptions have been some of the most extreme events ever to affect our planet’s rugged surface. Surprisingly, even though these explosions eject enormous volumes of material— at least 1,000 times more than the 1980 eruption of Mount St. Helens —and have the potential to alter the planet’s climate, relatively few have been documented in the geologic record.

Now, in a study published in Geology, researchers have announced the discovery of two newly identified super-eruptions associated with the Yellowstone hotspot track, including what they believe was the volcanic province’s largest and most cataclysmic event. The results indicate the hotspot, which today fuels the famous geysers, mudpots, and fumaroles in Yellowstone National Park, may be waning in intensity.

The team used a combination of techniques, including bulk chemistry, magnetic data, and radio-isotopic dates, to correlate volcanic deposits scattered across tens of thousands of square kilometers. “We discovered that deposits previously believed to belong to multiple, smaller eruptions were in fact colossal sheets of volcanic material from two previously unknown super-eruptions at about 9.0 and 8.7 million years ago,” says Thomas Knott, a volcanologist at the University of Leicester and the paper’s lead author.

“The younger of the two, the Grey’s Landing super-eruption, is now the largest recorded event of the entire Snake-River–Yellowstone volcanic province,” says Knott. Based on the most recent collations of super-eruption sizes, he adds, “It is one of the top five eruptions of all time.”