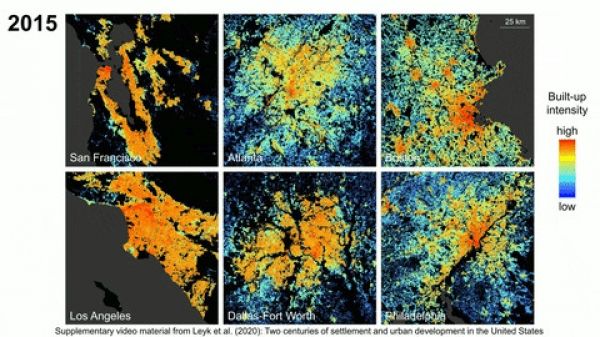 Over the past 200 years, the population of the United States has grown more than 40-fold to an estimated 328 million, with 81% of the population living in an urban area.

Cities, as we know them, are constantly changing and up until now, the absence of long-term data has limited our understanding of how our cities have become what they are today.

New research co-authored by Dylan Connor, assistant professor in the School of Geographical Sciences and Urban Planning, provides the most extensive picture to date of how urban development has unfolded in the U.S. over the past two centuries.

In his paper, published in Science Advances, Connor and his colleagues, led by Stefan Leyk of the University of Colorado Boulder, analyzed hundreds of millions of U.S. property records on buildings constructed between 1810 and 2015, enabling researchers opportunities to study land use, population change and urbanization at a granular level like never before.