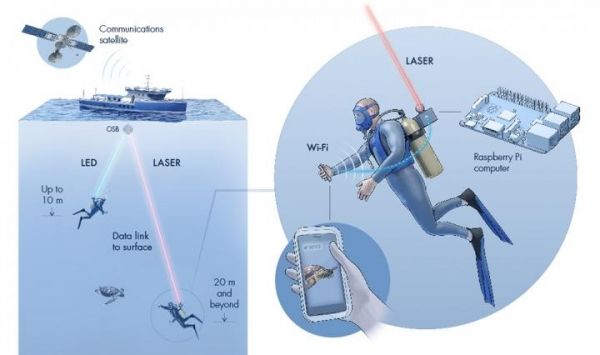 Aquatic internet that sends data through light beams could enable divers to instantly transmit footage from under the sea to the surface.

Aquatic internet that sends data through light beams could enable divers to instantly transmit footage from under the sea to the surface.

The internet is an indispensable communication tool, connecting tens of billions of devices worldwide, and yet we struggle to connect to the web from under water. “People from both academia and industry want to monitor and explore underwater environments in detail,” explains the first author, Basem Shihada. Wireless internet under the sea would enable divers to talk without hand signals and send live data to the surface.

Underwater communication is possible with radio, acoustic and visible light signals. However, radio can only carry data over short distances, while acoustic signals support long distances, but with a very limited data rate. Visible light can travel far and carry lots of data, but the narrow light beams require a clear line of sight between the transmitters and receivers.

Image: Aqua-Fi would use radio waves to send data from a diver's smart phone to a "gateway" device attached to their gear, which would send the data via a light beam to a computer at the surface that is connected to the internet via satellite. (Credit: © 2020 KAUST; Xavier Pita)